Tongue brachytherapy boost after external beam radiotherapy can be a strategy to deliver curative dose to the tumour without increasing toxicities to the surrounding normal organs at risk by taking advantage of the rapid dose fall-off of brachytherapy.

This case study involves a 59-year-old man who was initially diagnosed with a right lateral border tongue squamous cell carcinoma (SCC) in 2010. He underwent a partial glossectomy and right selective I-IV neck dissection without needing adjuvant treatment. Two years later he was found to have a recurrence at the right lateral border. A wide local excision demonstrated a 5mm SCC with a 1mm margin. He received adjuvant external beam radiotherapy, 56Gy in 28 fractions, to the right tongue and right upper neck with a concomitant boost of 6Gy in 3 fractions to the right tongue. Seven years later, he needed a right hemiglossectomy with free flap reconstruction and left neck dissection for contralateral nodal disease to completely resect a new 5cm SCC primary.

Six months later, a biopsy demonstrated SCC in the remaining native left mid tongue. He was recommended for definitive radiotherapy rather than resection of the residual tongue which would cause a functional deficit. He received 56Gy in 28 fractions external beam radiotherapy to the left tongue and submandibular fossa. This was then followed by high dose rate brachytherapy boost to the remaining left native tongue 2 weeks later. Under general anaesthetic, a total of five interstitial brachytherapy applicators were inserted externally from the left submandibular area into the left lateral tongue. They were arranged in 2 parallel planes. Dose optimisation was performed and radiation was delivered two days later. A total of 21Gy in 6 fractions was delivered twice a day over 3 days. During brachytherapy, a spacer was inserted on the side of the tongue to increase separation of the catheters from the left alveolus in order to minimise radiation dose to the alveolar process and mandible.

The patient tolerated treatment really well and his mucositis did not worsen with brachytherapy. Three months out, his speech and swallowing function remains very good with no evidence of disease.

This case highlights the use of tongue brachytherapy boost to improve the likelihood of cancer control and to protect normal tissue structures in the setting of previously irradiated sites with recurrent/new tongue cancer. 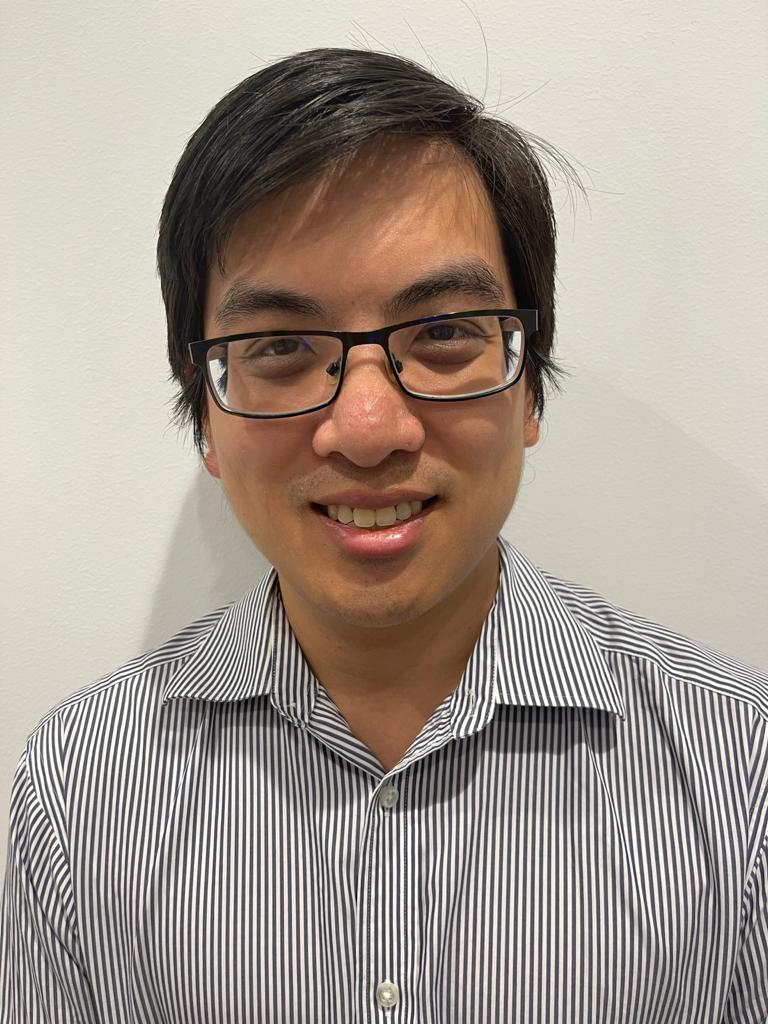 Dr Eric Fong is a Radiation Oncology registrar at the Prince of Wales Hospital in Sydney. He completed a Masters of Public Health and Tropical Medicine at James Cook University in 2014 and has published in peer-reviewed journals. He has an interest in patient-reported outcomes, brachytherapy, space radiation, and cancer survivorship.

Dr Wenchang Wong is a Radiation Oncologist at Prince of Wales Hospital who specialises in cancer treatment using radiation therapy. After his training, Wenchang spent time abroad as a post-doctoral research fellow at the MD Anderson Cancer Centre, Houston, USA in the field of radiation translational research. Wenchang has clinical interests in many tumour types and he is the chair and co-chair of several multidisciplinary cancer clinics. Wenchang has a special research interest in emerging radiation techniques for the treatment of cancer to improve patient outcomes.

Dr Bridger has since 2000 been a Visiting Medical Officer in the Department of Otolaryngology, Head and Neck Surgery at the Prince of Wales Hospital in Randwick. He is a member of the head and neck cancer care team at that institution and regularly attends the head and neck multidisciplinary clinic. He has lectured and published both nationally and internationally.

Prof Smee is a very experienced Radiation Oncologist and is practised in the field of Neuro-Oncology and Head & Neck Cancers, as well as Sarcomas. He has published in numerous peer-reviewed journals.